Miles Traveled
Photos Taken
Continents Visited
Countries Visited
Welcome to our website. Read about our recent travels with Postcards, our on-the-road blog; check out a selection of our published stories on the Stories page; or, view a few of our photos in the Photo Gallery. Click on About Us to learn a bit about Janet & Stu. Happy Travels!
Font size: + –
Print
3 minutes reading time (582 words) Perhaps these attempted escapes contributed to the decision by Attorney General Robert Kennedy the following year to close the country’s most notorious prison. But the main reason was the enormous expense of maintaining the facility.  Everything came (and still comes) to the island by boat–food, water, fuel, not to mention transporting guards, prisoners, maintenance workers–and now, rangers and visitors–to this rock.

Up the road up from the dock we passed through the sally port, part of the 1857 Guardhouse, oldest structure on the island from its days as a military fortification, walked by the burned out shell of the officers’ club and the power station before entering the New Industries Building. Here we viewed displays of oversize period photos in the cavernous space where federal prisoners once made furniture, gloves and Army uniforms. After viewing the restored gardens we passed the lighthouse and entered the main cellhouse. We highly recommend the audio tour of this place partly narrated by former guards and prisoners, complete with convincing sound effects.

Since 1972 Alcatraz has been part of Golden Gate National Recreation Area. The Park Service has sought ways to reduce costs, including installing a 307-kilowatt solar photovoltaic array on the cell block roof in 2011. Alcatraz Cruises operates the island’s ferry service, and introduced the innovative, hybrid catamaran ferry, Hornblower Hybrid in late 2008. The spinning vertical wind turbines atop the pilot house give the ship a perhaps slightly comical appearance while advertising it’s serious purpose. 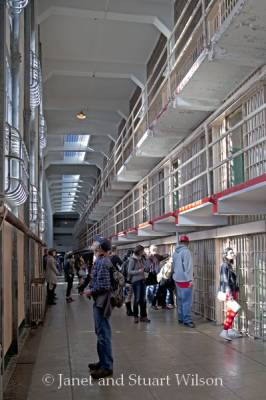 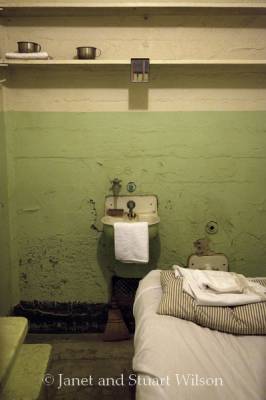 Inside the cellhouse and a not so nice typical Alcatraz cell

The turbines, together with photovoltaic panels on the roof, supply electricity to power the efficient, LED lighting system and instrumentation. But the real innovation is the hybrid propulsion system–the first of its kind. Banks of batteries power electric motors that turn the shafts propelling the vessel. This hybrid conserves substantial fuel and reduces emissions significantly. Hornblower Cruises, parent company of Alcatraz Cruises, is developing larger, more advanced hybrid vessels for it’s fleet, based upon their experience with this ship.

Alcatraz seems to have inspired innovation throughout its colorful history, from the escapees who fashioned tools from kitchen utensils and an inflatable raft from raincoats, to the Park Service’s solar project, to Alcatraz Cruises’ hybrid vessel.  A visit to the notorious island in San Francisco Bay is sure to inspire some insights of your own.

© By Janet and Stuart Wilson

For more about Alcatraz Island: www.nps.gov/alca

For transportation to Alcatraz, or more about Hornblower Hybrid: www.alcatrazcruises.com

Plan ahead; the ferries are often sold out several weeks in advance.

No comments made yet. Be the first to submit a comment
Designed by Formative Studios
Copyright © 2022 Wilsons' Travels