What’s the largest open space in San Francisco?  Golden Gate Park?  Guess again. It’s the San Francisco Presidio.  At 1500 acres, it’s about 1.5 times the size of Golden Gate Park.  And while it does have more buildings than the park, many of them historic, it has beaches, grassy fields, forests, wetlands, a lake, a golf course, tennis courts, playgrounds and 24 miles of trails.  Fishing, wildlife viewing (including 300 bird species), kite-flying, wind-surfing, not to mention hiking, cycling and riding engaged many hundreds of visitors on a recent sunny Saturday.
We’re members of the Bay Area Travel Writers’ and our July meeting was hosted by the Presidio Trust at their offices facing the Main Parade Ground here. The Trust, in partnership with the National Park Service and the Golden Gate National Parks Conservancy, administers most of the former army post.  Under special legislation that requires the trust be self-supporting, it must cover operating costs and fund capital projects without federal appropriations. The Trust has fostered over $1 billion in investment in historic preservation, habitat remediation and infrastructure upgrades and other projects through leases, other revenue and tenant investment.

The Trust headquarters occupies a rehabilitated circa 1895 red brick barrack that houses exhibit and meeting space plus offices, almost next door to the Disney Museum.  Our tour included the Officers’ Club, the post’s oldest building dating from around 1810.  Undergoing major rehabilitation, the building is scheduled to reopen in 2013 featuring event space with a panoramic  view, classrooms, and the Presidio Heritage Center, a permanent exhibit on the Presidio’s history.
We viewed the former airfield-turned public gathering space at Crissy Field, the serene National Cemetery, a new Golden Gate Overlook with breathtaking views of the Bridge, plus rehabilitated historic housing that’s now home to 3,000 residents. Last stop was the Inn at the Presidio, located in beautifully rehabbed Pershing Hall, former Bachelor Officers’ Quarters built in 1905.  Opening this past April, with 22 rooms, including 17 commodious two-room suites, an inviting parlor, front porch made for rocking and back patio with fire-pit, it’s the Presidio’s first public accommodation.  We especially liked the collection of bugles mounted in the entry hall of this attractive, and historic place to call home while visiting here. 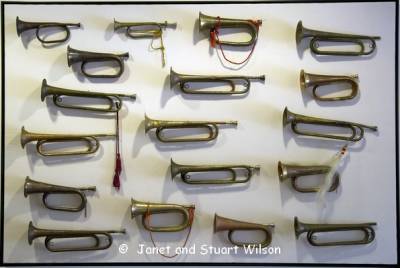 Bugle Display at Inn at the Presidio

Accessible on a Muni or Golden Gate Transit bus, or on weekdays, the free PresidiGo Downtown Shuttle, San Francisco’s historic Presidio serves up opportunities to stay, play, dine, recreate and investigate an important piece of local and national history.  Next time you visit check out San Francisco’s birthplace, re-purposed from defending the city to serving as its new front yard.

More posts from author
Tuesday, 08 July 2014 NEWS--Devil's Slide Trail is Open
Monday, 03 February 2014 The Cutting Edge -- Getting to (and From) Alcatraz
Monday, 16 December 2013 THIS IS A TEST OF THE WILSONS’ TRAVELS NEW BROADCAST SYSTEM–ONLY A TEST!

Thanks for coming on the tour and the great story!

Cancel Reply
Thanks for coming on the tour and the great story!
Cancel Update Comment

Thanks for hosting us Dana, we thoroughly enjoyed it. We'll be back soon.

Thanks for hosting us Dana, we thoroughly enjoyed it. We'll be back soon.
Cancel Update Comment
Designed by Formative Studios
Copyright © 2020 Wilsons' Travels