Miles Traveled
Photos Taken
Continents Visited
Countries Visited
Welcome to our website. Read about our recent travels with Postcards, our on-the-road blog; check out a selection of our published stories on the Stories page; or, view a few of our photos in the Photo Gallery. Click on About Us to learn a bit about Janet & Stu. Happy Travels!
Font size: + –
Print
5 minutes reading time (992 words) “Welding school lasted just two weeks before I went to work in the shipyard as a ‘tack welder,’” said Catherine  Morrison.  “Once on the job my supervisor trained me after my regular shift, and I was soon certified as a ‘journeyman’ welder, raising my pay from 90¢ to $1.38 per hour.”
She recently recounted this vivid memory near the site of the former Kaiser Shipyards at the Rosie the Riveter/WWII Home Front National Historic Park Visitor Center in Richmond, California. Vivacious and tack-sharp at age 90-ish, Kay is one of the “Rosies” (or, more appropriately, “Wendy the Welders”) who helped build the 747 ships launched in Richmond during WWII. These women are the brightest gems of this historic park–they are living history–and were the highlight of our visit. 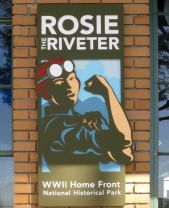 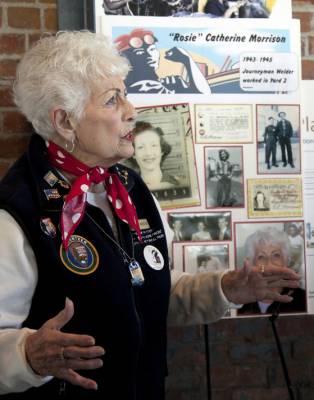 And history was a major theme. From the 1873 East Brother Lighthouse, to the historic neighborhood of Point Richmond, where the city got its start around 1900, to the pristine 1931 Model A Ford coup at the Richmond Museum of History in the former Carnegie Library, to the Red Oak Victory, the last survivor of those 747 “bottoms” that slid down the ways here between 1940 and 1945, Richmond’s past enveloped us.
Richmond’s gritty, industrial reputation–railroads, oil refinery, steel mill–has slid over the past decades to that of a declining industrial city, mired in poverty and crime. So we were surprised to discover a much more positive reality, and expect the city’s image will follow suit.

The Rosie the Riveter/WWII Homefront National Historic Park is reason enough to visit Richmond.  It’s Visitor Center occupies what was once the fuel storage building of the vast Ford assembly plant that opened on Richmond’s waterfront in 1931. Closed in the 1950s, derelict for decades, and once slated for demolition, the Albert Kahn-designed brick structure has been rejuvenated and given a new purpose by developer Eddie Orton.
In addition to the Visitor Center, the aptly-named Assembly Restaurant features New American cuisine in what was once the plant’s boiler room, and portions of the assembly-line space are leased out to specialty stores. But the pièce de resistance is the Craneway Pavilion, a vast, soaring space fronting the bay with light pouring-in through huge, roll-up glass doors, massive cranes still riding on overhead rails.
That 1931 Model A coupe we ogled at the History Museum turned out to be the very first vehicle produced at Ford’s Richmond plant, and returned to like-new condition by Ford before installation at the museum. Here, museum director Melinda McCrary used the Model A and other artifacts and historic photos to help us understand Richmond’s history–including the startling fact that the city grew from around 20,000 residents before WWII to over 100,000 afterwards. This mass migration, drawn from around the country to jobs in Richmond’s war industries–especially the Kaiser Shipyards–profoundly transformed the place. The abrupt shutdown at the war’s conclusion no doubt planted the seed of future problems.

Sailing Caprice, a private catamaran charter service based in Richmond, offered a very different perspective on this city. Sailing in Richmond Harbor and out into the Bay, Point Richmond dominates the view. A chance for a close-up look at East Brother Light Station, a unique overnight accommodation on its own tiny island, and a water-side view of Red Oak Victory highlighted the morning cruise.
The best way to discover the beginnings of the city are in Point Richmond with a walking tour of the district. Grab an informative pamphlet called “Historic Point Richmond.” It’s a useful guide for such a tour, featuring more than a dozen buildings, most dating from the first decade of the 20th century, shortly after Richmond’s founding as a railroad town.
Because of its railroad connections and deep water access, Richmond was a natural location for war production. The Ford assembly plant turned to producing jeeps and tanks, and more than 50 other war-related industries located in Richmond, but none on the scale of the Kaiser shipyards.  At their peak the four shipyards employed 90,000 workers, on three shifts around the clock.

The Red Oak Victory in 1944 and Pt. Richmond

It is fitting then, and very fortunate, that the Red Oak Victory is berthed in Richmond today–not far from where she was launched in Shipyard No. 3 in 1944.  In the so-called “mothball fleet” in Suisun Bay from 1969 to 1998, the Red Oak was rescued from the scrap heap and transferred to the Richmond Museum of History through the efforts of many local volunteers. We toured the 455 ft., 6,000-ton vessel with docent John Phillips, who led us around the deck, through crew quarters, the Captain’s cabin, the bridge and the engine room, ending in a spacious cargo bay now serving as a museum. He was way too young to have served on her, but was nonetheless knowledgeable and enthusiastic about this last survivor of the 747 vessels launched at the these shipyards.
Catherine shared her experience after the war when she was laid off and looking for work. Though she didn’t mind that the “boys” returning from combat should get priority for the best jobs, she wasn’t willing to settle for the waitress job the unemployment office offered her. She found work as a bank teller, eventually retiring as branch manager. She said, once she proved herself as a welder, she knew she could overcome obstacles and do anything she set her mind to. We sensed this same attitude of determination in this fascinating and surprising city working to overcome some obstacles of its own.

I lived in Richmond and wasn't aware of any of this. But then I lived there from the age of 2 until 6

Cancel Reply
I lived in Richmond and wasn't aware of any of this. But then I lived there from the age of 2 until 6 ;) Tom Brunton
Cancel Update Comment

Hi Tom, Believe it or not, I also lived in Richmond. It was right after WWII ca 1946-7 and all I remember is our upstairs apartment. Today it's under the John Knox freeway! Great to hear from you! Janet

Hi Tom, Believe it or not, I also lived in Richmond. It was right after WWII ca 1946-7 and all I remember is our upstairs apartment. Today it's under the John Knox freeway! Great to hear from you! Janet
Cancel Update Comment

I was surprised to discover there was a John Knox Freeway. I used to babysit for his kids in Point Richmond.

I was surprised to discover there was a John Knox Freeway. I used to babysit for his kids in Point Richmond.
Cancel Update Comment
Previous     Next
1 2
Designed by Formative Studios
Copyright © 2020 Wilsons' Travels