“Well, that makes you Westmoreland County royalty!” said Anita of the Westmoreland County Historical Society. This came after we had confirmed that John Culbertson, Stu’s 5th Great Grandfather, had purchased several hundred acres at Hanna’s Town from the widow of the town’s founder, Robert Hanna, in 1786. Unfortunately, no castles or palaces accompany the “royal” status. 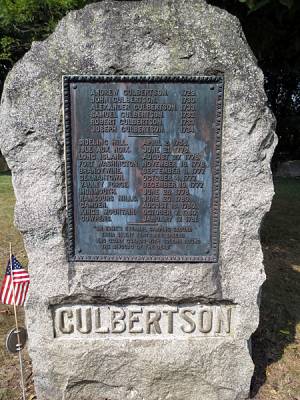 We were warmly welcomed and generously assisted in Westmoreland County (just east of Pittsburgh); as well as in Wayne County, Ohio and Franklin County, Pennsylvania–pretty much everywhere we searched for Culbertsons.
Wooster is a pleasant college town, and seat of Wayne County where Stu’s 2nd Great Grandfather, Milo Culbertson, was born in 1835. Stu inherited a photo of Milo, his wife and children, thus he is a known ancestor. We followed the guidelines by starting with what knew (Milo) and working backward. 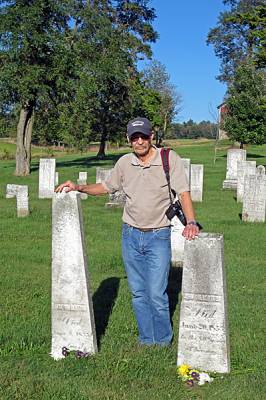 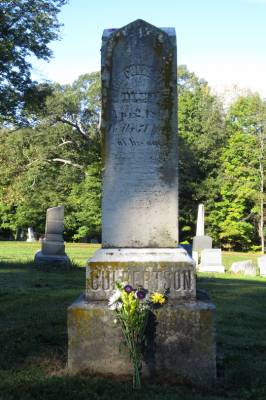 Milo served in 65th Ohio Infantry during the Civil War and moved west with his family around 1870. He’s buried in Lyons, Kansas (not on our itinerary). Valuable guidance from the librarians in the local history and genealogy section of the Wayne County Library in Wooster, led us to find the graves of Milo’s father, John Culbertson (what else) and his grandfather John Culbertson (that’s Stu’s 4th Great Grandfather). The former is buried in the Wooster Cemetery in a family plot with his wife and several of his children.  The latter John in the “Old Presbyterian Cemetery” in Apple Creek, a few miles southeast of Wooster, next to his wife. Both were born in Pennsylvania–so we headed there next.
In Westmoreland County we could locate no marked grave for Milo’s great grandfather, John Culbertson, who died at Hanna’s Town in 1797, but we did locate a small cemetery atop a hill where he and is wife, Margaret were likely laid to rest.      At Hannah’s Town Historic Park we checked-out a reconstruction of Hannah’s original log home–the original was burned by the British and Indian allies in the final, hostile act of our revolution in July,1782. With the Historical Society’s help we learned that in 1786 John purchased the property here. They also helped us find records in the courthouse when the heirs sold the property in 1798, and found evidence that he served as a private in the Revolutionary War.

In Chambersburg, our final Culbertson family history destination, the Franklin County Historical Society gave us access to their records and helped us locate relevant material. We confirmed that Samuel Culbertson, Stu’s 6th Great Grandfather, served in the French and Indian War as a Sergeant-Major in the 1758 Forbes Expedition. That expedition resulted in the French abandonment of Fort Duquesne, later called Fort Pitt, and today is called Pittsburgh.
They also gave us directions to “Culbertson Row.”  Family lore said this was the place where several members of the Culbertson family settled in Pennsylvania.  They named their settlement (it was on the frontier in the 1730s when they arrived) after the place in Ireland from whence they emigrated.  It was a thrill to find three stone farmhouses still occupied as residences 270 or so years after they were constructed by Samuel Culbertson, one of his brothers, and a cousin.

Hey Stu,
I was raised in NE Ohio, in and around Geneva.

Cancel Reply
Hey Stu, I was raised in NE Ohio, in and around Geneva.
Cancel Update Comment

Isn't it great to find out so much family history. I have family from that area so it says in some of my information. Would love to go there also. Have a great rest of your trip.

Cancel Reply
Isn't it great to find out so much family history. I have family from that area so it says in some of my information. Would love to go there also. Have a great rest of your trip.
Cancel Update Comment
Designed by Formative Studios
Copyright © 2020 Wilsons' Travels