The Sinclair family are the hereditary Earls of Caithness, the northernmost mainland Scottish shire. Caithness is just opposite Orkney, and also boasts a significant Viking or Norse influence. We were pleased to stop at the port of Scrabster here because the county is also the traditional home of Clan Gunn, of which Stu's Wilson family are a sept.

We'd say the reason for calling at this port though, was to visit Castle Mey. This one-time seat of the Sinclairs dates from the 16th century and was enlarged and substantially altered in the early 19th century. Queen Elizabeth, the Queen Mother, purchased the castle in 1952, shortly after her husband, King George VI died. In serious disrepair when she acquired it, the castle became her summer home after restoration. She loved to spend time here and the locals were glad for her presence. The castle, though much larger than your average home, and the garden, established under her direction, both create a welcoming and homey atmosphere rather than the grand opulence usually associated with royalty. 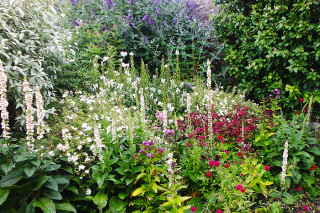 A long overnight sail brought Aegean Odyssey to Oban, on Scotland's west coast next morning. The excursions offered took us out of town. We opted for a visit to Inverary Castle, the palatial home of the Dukes of Argyle. The quaint village of Inverary and its namesake castle face Loch Fyne, a narrow fjord-like arm of the sea that opens to the Firth of Clyde.

Over an hour on the coach from Oban might have seemed long, but our guide Ann provided a running commentary on the sights and related each to some event in Scottish history. Inverary Castle, really a house museum open to the public, remains the home of the Duke and his family, though they were not in residence during our visit. We did enjoy the home furnished with exquisite art, furniture, tapestries and chandeliers, plus a memorable collection of weapons. 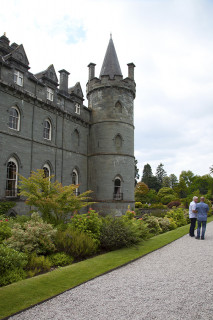 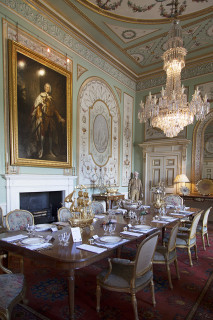 The final leg of our cruise took us overnight from Oban to Greenock, a port about 25 miles down the River Clyde from Glasgow. We disembarked from Aegean Odyssey for the last time (though the first time in the rain), and along with our luggage, boarded coaches. We soon passed through Port Glasgow where our excellent guide, Marjorie, pointed out the replica of a small ship called the Comet. The Comet was Europe's first commercial steam-powered passenger vessel, entering service in 1812 plying the Clyde between Glasgow and Greenock. It turned out that Henry Bell, Comet's designer, was Marjorie's distant relation. 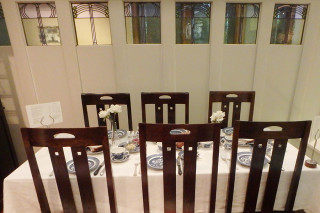 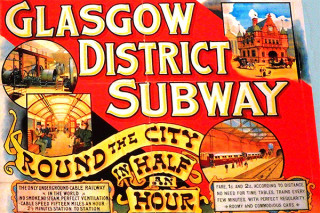 A coach tour of Glasgow, Scotland's largest city, included a stop at the "People's Palace" on Glasgow Green, now the Glasgow City Museum and wound-up at Kelvingrove Art Gallery and Museum. Here we had time for lunch, a lunch-time organ concert, and viewing a few exhibits, including Charles Rennie Mackintosh-inspired furnishings, plus some rare maps, photos and artifacts depicting Glasgow's growth and development, 1714 - 1837.

In the afternoon we headed for Edinburgh and our accommodation, the APEX City Hotel in Grassmarket. It's a modern hotel in an excellent location in the Old City with Edinburgh Castle looming above. We took advantage in the late afternoon to explore our neighborhood. Road Scholar hosted dinner in the hotel dining room that evening where we got to share and reminisce with our fellow road scholars. Convivial conversation, companionable new friends, and food several notches above standard for a hotel dining room–all-in-all a memorable farewell meal. 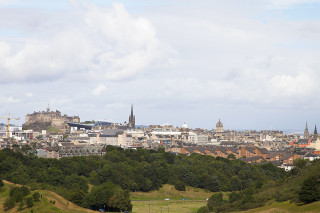 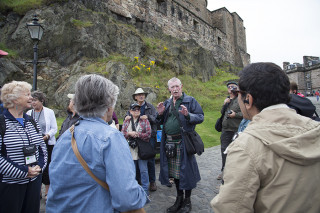 Next day was our last with Road Scholar. It began with a guided coach tour around historic Edinburgh finishing at Edinburgh Castle where our Road Scholar guides, Nick and Brian led their respective groups up to the top. We queued to view the Scottish crown jewels and worked through the crowd to see the impressive banquet hall. We ended touring an exhibit about the POWs once imprisoned here, including some Americans.

That afternoon we joined our new friends, and Road Scholar traveling companions Glenn and Diana on a small adventure. We all hopped-on the #47 bus on South Bridge and rode about 40 minutes out to the village of Rosslin. At Glenn's suggestion, we were going to explore Rosslyn Chapel. 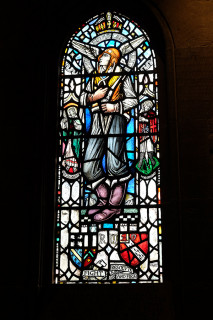 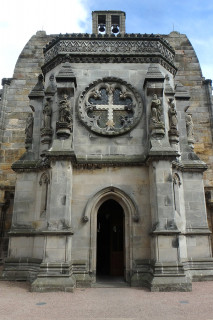 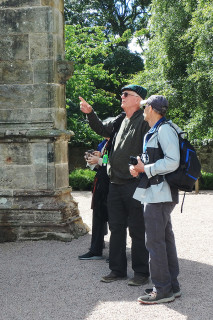 It's a 15th century architectural gem founded by William Sinclair, the 1st Earl of Caithness. Renowned for its exquisite stone carving, it's actually the choir of what was originally to have been a much larger house of worship. Open for tours as well as services, attendance jumped after the publication of Dan Brown's The DaVinci Code in 2003, from around 36,000 to 176,000 visitors per year! The chapel was and remains privately owned; it's current proprietor is Peter St. Clair-Erskine, 7th Earl of Rosslyn.
Our final Road Scholar activity was dinner and a show that evening at "Spirit of Scotland," a dinner theater with Scottish song and dance, including the pipes and the sword dance. We found the show a little "schmaltzy," but thought the female soloist and the accordionist notably talented. 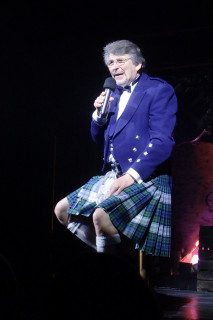 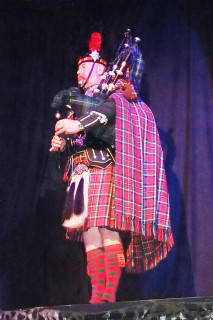 Performers at Spirit of Scotland dinner theater in Edinburgh

After a fond farewell to our fellow "Road Scholars" we anticipated another week in Britain on our own, though we knew we would miss the ease of a pre-arranged journey, as well as the companionship. But we looked forward to family history and genealogy discoveries. Stay tuned.