When we mentioned to people that we planned to visit Scranton, we’d often get a puzzled look, or maybe a raised eyebrow accompanied by, “why?” We’d always say ancestors or family history, but we hit upon another reason: Steamtown. It’s a National Historic Site devoted to steam railroading history that arguably rivals our own California Railroad Museum in Sacramento. Run by the National Park Service, we found it in downtown Scranton. Our tour of the Technology Museum and locomotive repair shops, made it definitely worth a trip. 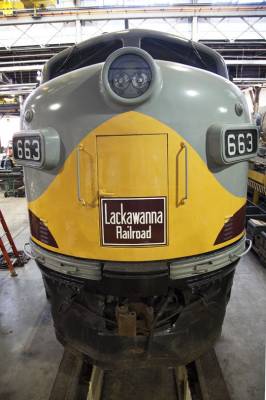 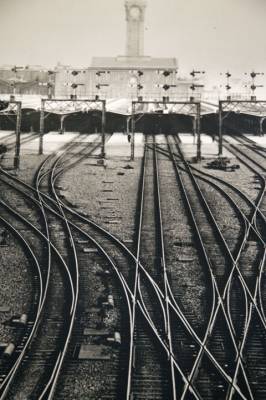 This was just one of several pleasant surprises that burnished our family-history-oriented trip. From waterfalls, to Falling Water, from Pittsburgh to Gettysburg, we found places that justify a journey here even if you’re not chasing down ancestors.

We visited Ithaca to see the Cornell campus, but also to visit the Finger Lakes wine region–it garners praise and respect for its wines, especially Riesling. Though we chose a cool, showery day to wander around Cayuga and Seneca Lakes, we were not disappointed in the wines we tasted, at least not the whites.  Some, though not all, of the reds struck us as unremarkable. We particularly enjoyed wines at tiny Heart & Hands Winery, and at Ravines where the whites proved delightful and the reds pleasantly surprised us.
The glaciated landscape around Ithaca yielded the real surprise–waterfalls. One afternoon we took short hikes to see three of the best: Buttermilk, Taughannock and our favorite, Enfield Glen in Robert H. Treman State Park. Here the Gorge Trail follows Enfield Creek through a stunning, vertical-walled gorge to Lucifer Falls.

Stu and Janet at Taughannock Falls, NY and view of Pittsburgh, PA

In Pittsburgh our only regret was that we didn’t allot more time to enjoy it. We spent one day checking out the Fort Pitt Museum at Point State Park, walking the Allegheny Riverfront Trail to the Senator John Heinz History Center, then scarfing a fish sandwich for lunch at nearby Wholey’s Market in the Strip District. In the afternoon we rode up the Duquesne Incline and down the Monongahela one, before hoofing along East Carson Street to our hotel in the Southside Flats district. We found surprisingly good dinners each night by strolling East Carson, the eclectic neighborhood’s lively main street.
Though we were obliged to book weeks ahead to assure we could see the place on our schedule, we had no regrets about visiting Falling Water, Frank Lloyd Wright’s quintessential and iconic design in the hills of southwestern Pennsylvania. Donated to the Western Pennsylvania Conservancy by the original owners (and Wright’s clients), the Kaufmann family, the property is probably in better shape today than at any time since it was built in the late 1930s. Constructed of steel, glass, concrete and local sandstone, the main floor cantilevers 15 feet over the tumbling falls of Bear Run. Our knowledgeable young guide, Andrew, was full of anecdotes and facts about Wright, the Kaufmann family, and the building, pointing out such details as the massive native boulder incorporated into the home’s fireplace hearth.

Harrisburg served as our final home base, giving us a chance to see this city, including the massive and elaborate state capitol and a noteworthy Museum of the Civil War. We also spent time here researching our ancestors in the State Archives. On several days we made short trips in the area: one to Lancaster County where we visited Wheatlands, President James Buchanan’s home, and Amish Country where our Mennonite guide, Paul gave us an insightful view of his Amish “cousins;” and another to Chambersburg, in search of Stu’s Culbertson ancestors that we’ll report on in the next postcard.

While Chambersburg was a personally rewarding journey, we think all Americans should endeavor to visit Gettysburg. It was our first Civil War battlefield, and a place that will stick with us. The large, modern visitor center with museum and theater is the place to start and we found the film called, “A New Birth of Freedom,” narrated by Morgan Freeman to be well done. But the Gettysburg Cyclorama, a huge 1884 painting-in-the-round of the battle was totally captivating. It somehow managed to simultaneously convey both the vast scope and grisly intimacy of this incredibly bloody and pivotal battle.

Our guided tour took us to view the landscape–the scene of battle–where not too much had changed from those first three days in July, 1863. Save, that is, for the 1,000+ monuments since erected. We tried to imagine how this now peaceful terrain would be when occupied according to our guide Joel, by 170,000 soldiers engaged in desperate struggle. We stood at “The Angle” where Pickett’s charge briefly penetrated Union lines before the assault finally faltered under withering fire, a moment dubbed the “high water mark of the rebellion.”  And we stood on Little Round Top, high ground on the Union extreme left providing a sweeping view of much of the battlefield; a spot where only quick and decisive action by a 26-year-old Pennsylvanian, Colonel Strong Vincent, prevented the Confederates occupying and likely turning the battle.
Finally, we visited the Soldiers Cemetery, the spot where several months after the battle Lincoln delivered his famous address. As we left Gettysburg we indeed felt we had been on “hallowed ground.”

That was quite a trip! An amazing number of interesting stops and experiences. Nice pics also — wish there were more.

Cancel Reply
That was quite a trip! An amazing number of interesting stops and experiences. Nice pics also — wish there were more.
Cancel Update Comment

It really sounds like a great trip. You are really putting a lot into it. Keep enjoying your selves.

Cancel Reply
It really sounds like a great trip. You are really putting a lot into it. Keep enjoying your selves.
Cancel Update Comment
Designed by Formative Studios
Copyright © 2020 Wilsons' Travels