Our itinerary, christened “The Pagan–Mandalay Packet” by our operator, Pandaw River Adventures, travels a roughly 150 mile stretch of the Ayeyarwady River, (also known as the Irrawaddy), from Bagan (Pagan) to Mandalay and beyond to Nwe Nyein. This river, rising in the eastern Himalayas and emptying into the Bay of Bengal through a vast delta, is considered the life blood of the country. Ancient capitals line its banks. It has long been a thoroughfare, and transportation artery, immortalized by Rudyard Kipling as “the Road to Mandalay.”

In addition to Bagan, we visited several more former capitals: Inwa (Ava), Sagaing, Amarapura, and Mandalay. We also visited several places that weren’t former capitals, beginning with Pakokku. Here, on the west bank, we rode tuk tuks to the thanaka market where the wood ground into the distinctive Burmese makeup is sold, and then wandered through the bustling central market nearby. We also received an unexpected gift from a sidewalk vendor who fanned our sweating faces when we inquired if she had fans for sale. After we purchased a small bag of dried fruit, she insisted we take her personal fan as we left. This is one small example of the generosity and goodwill that seemed pervasive among the people we met in Myanmar. 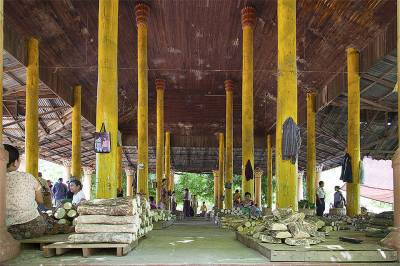 Yandabo, a small village on the east bank is renowned for its pottery and as the site of the signing of its namesake treaty in 1826, marking the end of the first Anglo–Burmese War. This peaceful place isn’t yet connected to the grid–we saw neither power lines nor automobiles. We did observe PV arrays charging cell phones and batteries used to power TVs and satellite dishes–and we saw motorbikes. A pottery-throwing demonstration, a pick-up game of Gaw Li, and a visit to the local school, funded by Pandaw Charities, rounded-out our visit here. Our northernmost port of call, 40 some miles north of Mandalay, was Nwe Nyein, a village also known for pottery. Here they produce large glazed pots fired in brick kilns.

The former capitals naturally offered more in the way of historic sights–most of them with religious significance. These included the Bagaya Kyaung Monastery in Inwa, and the Shwendaw (Golden Palace) Monastery in Mandalay, two exquisite examples of intricately carved teak buildings, the latter one still showing remnants of its former gilding, and Mahamuni Temple in Mandalay with it gilt bronze Buddha, and Umin Thounzeh a cave temple on Sagaing Hill with its arcing row of 45 Buddha statues.

A young nun on Sagaing Hill/U Bien's Bridge at sunset

In Amarapura, just south of Mandalay, we boarded small boats to paddle about Taungmyo Lake at sunset and enjoy the view of U Bein’s Bridge, said to be the world’s longest teak bridge. Then, just as sunset was glowing orange and pink, our bartender, “Jack” drifted up and passed out drinks of similar hues with which we toasted Jack and our good fortune. 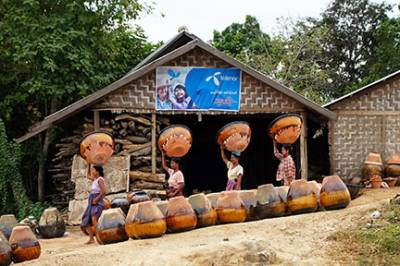 Bejewelled with temples, pagodas and monasteries, Sagaing Hill offers sweeping views of the river and the region. Our visit to a convent here luckily coincided with an elaborate ceremony commemorating a generous donation to the convent–and to each of the young nuns–from a prominent family. In another example of fortuitous timing, upon reaching the bottom of the hill in the town of Sagaing we drove into a huge political rally sponsored by the National League for Democracy (NLD). Exiting our coach we were swallowed by an enthusiastic crowd and handed flags and banners and joined in the celebration. At this moment we became convinced that the party of Aung San Suu Kyi would win the upcoming election, so long as it was conducted fairly.

This hopeful event, along with our other personal encounters with the people of Myanmar, was the most memorable aspect of our river journey. Of course this included our crew, starting with our shipboard guide, Kyaw, who so generously shared his extensive knowledge of, and obvious affection for, his homeland, and Bobo, the Purser who oversaw everything on board our vessel quietly, efficiently, and with unassuming dignity. “Jack,” the Bartender, kept things light and fun with his humor and effortless English. And the people we met whenever we left our vessel, from street vendors to nuns, to potters and especially the children, were unfailingly friendly, open and positive.

Note:  Clicking on an image will open as a larger image.

To read our blog at All Things Cruise, highlight the link below and right click.  Then click on "Open Link in new window."  http://allthingscruise.com/topics/wilson/