We had Maeshowe all to ourselves. Boarding the shuttle with seating for 23–the maximum number of visitors allowed at one time in the neolithic chambered tomb–we found 23 vacant seats. It seems a tour bus failed to deliver its passengers, so we ended up with a private tour of a 4,800-year-old World Heritage Site!
Nearly three days earlier our ship had sailed out of Douglas harbor and headed north to a port-of-call more northerly than Juneau, Alaska. Weather prevented our planned stop on the Isle of Mull, so we took an afternoon sightseeing cruise around the nearby islands of Coll and Tyree, before heading farther north. We sailed through Little Minch and The Minch arriving the following morning in Kirkwall, Orkney Islands. And what might have been a disappointment turned out to be a blessing. The Orkneys were our most important destination on this entire trip, and we enjoyed extra time here.
What's the big deal about the Orkneys? We'd say, the stark beauty, abundant wildlife and rich history, especially the history. Orkney also offers a particular attraction for Stu. His DNA test suggested his paternal line, his Y-chromosome, traced back to these islands 500 to 1,000 years ago. Obviously, he had to see the place.
As we entered Kirkwall Bay, we noticed a massive cruise ship tied up to a pier not far away–no other vessel could have shared the pier, it was fully occupied–so, we dropped anchor in the bay. We tendered-in to the cozy harbor and spent the afternoon wandering around the pleasant little town of Kirkwall with its outsized cathedral. We toured the Orkney Museum, tried and failed to arrange a tour of Highland Park Distillery, enjoyed lunch at St. Magnus Café, and wandered through town visiting the shops. The place buzzed with passengers from the other ship who seemed to be speaking German or German accented English. 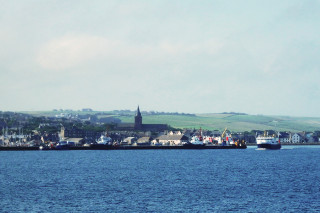 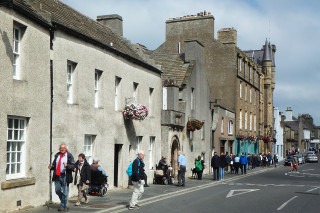 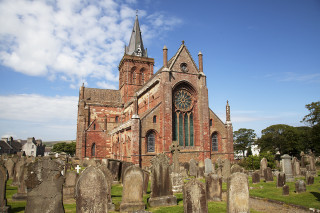 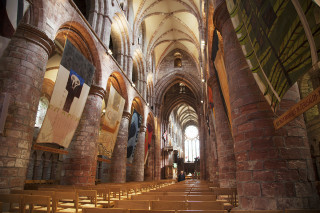 We toured St. Magnus Cathedral, this little city's largest and most impressive building. With Romanesque and Gothic elements, St. Magnus was raised in red and yellow sandstone between the 12th and 16th centuries. The exquisite stone carving, and soaring interior reminded us of other Medieval cathedrals, but St. Magnus' multi-colored sandstone makes it especially memorable. That and its scale yields a dramatic presence in this modest town.

The next morning we met our guide, Frank, at the west entrance to St. Magnus. A licensed private guide, we hired him online through Odin Tours, an Orkney company. Normally, our shore excursions are arranged by Road Scholar, or we explore on our own. We hired Frank to make sure we saw Orkney's renowned neolithic UNESCO World Heritage Sites. Neither Aegean Odyssey nor Road Scholar could guarantee that–at least not far enough in advance for us.
It turned out that Frank was not a native Orcadian, but an immigrant. With a slight echo of German in his otherwise flawless English, Frank demonstrated deep knowledge of, and genuine affection for, this remote place. Perhaps a person who chooses his homeland has more appreciation for it than a native might. Heading out of Kirkwall, we got a roadside view of Scappa Flow, accompanied by an illustrated lecture of its significant role in WWI and WWII naval history. Then we moved on to the neolithic sites. 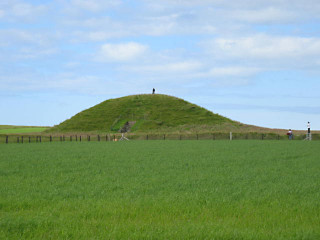 This is where we got our "private" tour of Maeshowe. From a distance, the regularity of its shape suggests that the small hill may be a man-made, rather than a natural phenomenon. As we approached we noticed some stonework that marked the entrance to a tunnel leading to the tomb's interior. A duck-walk was required to navigate the three-foot high, 36-foot long passageway, but the payoff was worth it. The 15-foot square stone chamber, rose with a corbeled ceiling to a height of 12½ feet with a Victoria-era "reconstructed" roof.

Everything about this elegant structure astonished us, but the two things we found most fascinating? First, the precision alignment of the entry passage such that on Winter Solstice and a day or two either side, the low-angle sun shines directly into the central chamber, illuminating the back wall. Second, the graffiti. In this case it was left by a band of Viking warriors around the 12th century when they took refuge here from a blizzard. Carved into the flagstone wall are runes (the pre-Latin alphabet of Old Norse) constituting the largest ever find of such inscriptions. Our Maeshowe guide, Richard, translated a few but claimed he was not permitted to read us the bawdier inscriptions. 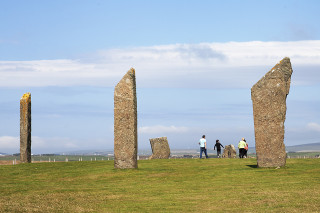 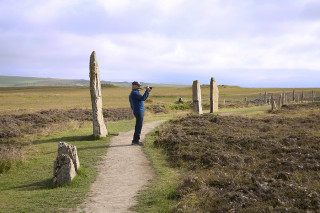 ​Neolithic Standing Stones of Steness and the Ring of Brodgar

​We continued our tour with Frank, visiting the Standing Stones of Steness, the Ring of Bodgar (also a large circle of standing stones), and Skara Brae. This latter site is in some ways even more impressive than Maeshowe. It's a prehistoric village, occupied by farmers for 300-400 years beginning around 2900 BC. It is in fact the best preserved such village known in Northern Europe, pre-dating Stonehenge and Egypt's Great Pyramid. 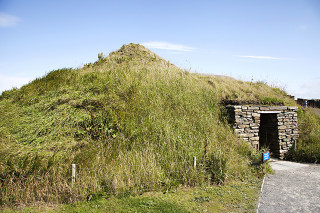 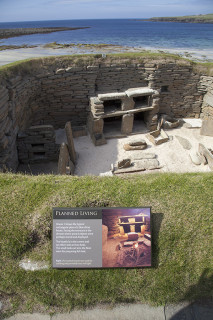 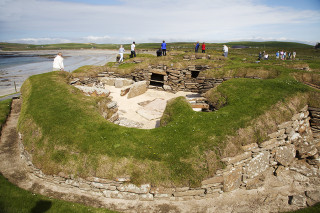 Nine houses and a workshop have been excavated just above the beach on Mainland, Orkney's west shore. The village was discovered in 1850 following a devastating storm that eroded the shore and shifted large dunes, exposing some of the houses. The striking thing about these semi-subterranean houses is that they are furnished–and most are intact save for the roof. Peering into these homes from the walkway, it almost seems the occupants could return any minute from herding sheep or fishing.

We were a bit sad when we had to tender back to our ship, but first we enjoyed a pint in the pub with some fellow Road Scholars, sharing our impressions of this place on the edge.