Travel, tourism and second homes underpin the economy of Rockport, the smaller, more picturesque of these two adjacent towns on Cape Ann. Our week in Gloucester followed a week in Kiwi Cottage in Rockport, a similar, slightly larger accommodation that lacked the view. We bowsed Main Street, Dock Square and Bearskin Neck, a slim finger of land jutting into the Atlantic lined with art galleries and souvenir shops, and named for a bear caught in the tide in 1700.

In contrast, Gloucester still resembles the commercial fishing town it has always been, with cold storage, processing plants and boat yards lining the harbor.  Yet Gloucester isn’t the bustling fishing port it was for more than 350 years—the commercial fishery has pretty well collapsed, though a few of the determined and resourceful continue to work in the traditional trade. 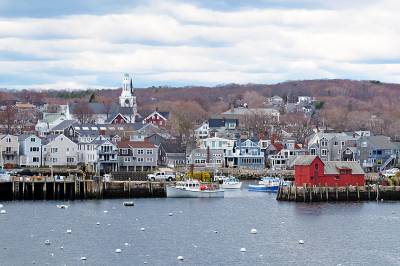 And Gloucester seems reluctant to let go of its long and proud history, symbolized by the Fisherman’s Memorial along the waterfront. Among the thousands of names of Gloucester fishermen lost at sea listed on bronze plaques is a group from 1760, and among those is one Abraham Williams, Janet’s 6th great grandfather. One afternoon we headed out to Eastern Point Lighthouse and walked along Dog Bar breakwater for views of the lighthouse and the harbor in which so many have sought shelter for so long. 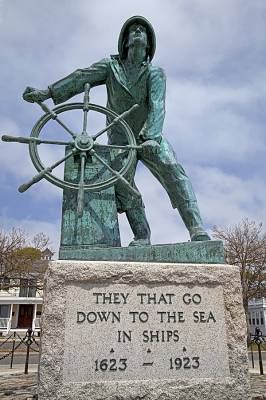 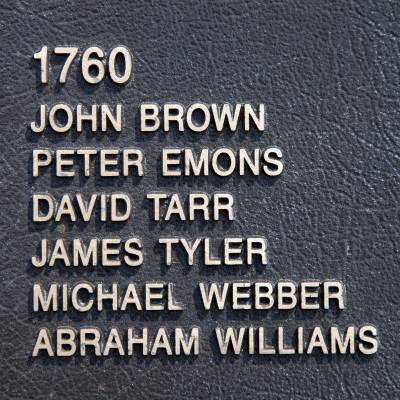 The town’s historical focus may have inspired the women who volunteer in the City Archives, in the basement of City Hall.  They have proven unfailingly friendly, skilled and eager to help those searching for bits of family history in the city’s records. They gave us directions to a house in Annisquam village built in 1660 by Edward Harraden, Janet’s 8th great grandfather. Unfortunately for us, a family lives there and it is not open to the public.

The Harraden House and House of 7 Gables

Nearby, historic Salem, Essex County seat, drew us for sightseeing as well as research. After visiting the public library, we spent a couple of half-days in the Phillips Library, and a day sight-seeing. We learned that the House of Seven Gables, inspiration for Hawthorne’s novel, was actually owned by his cousin, Susanna Ingersoll, and that Nathaniel Hawthorne was a descendant of John Hathorne, a principal judge at the Salem Witch Trials. We wonder if he would have ordered Hester Dutch of Gloucester, Janet’s 9th great grandmother, to be hung for witchcraft if these trials had not ended in the nick of time. Tour and event revenue from the historic house museum supports education and training programs for immigrant youth, their families and at-risk teens in Salem.

Its downtown a confection of early- and mid-19th century brick architecture, Newburyport remains one of our favorite towns. Unique shops and art galleries rewarded our time between food or beverage breaks. Traveling between Newbury and Gloucester we discovered Down River Ice Cream in Essex with its delicious and creative flavors of hand-made ice cream—everyone orders the “child-size” because even that is quite a bit more than even Stu normally eats. 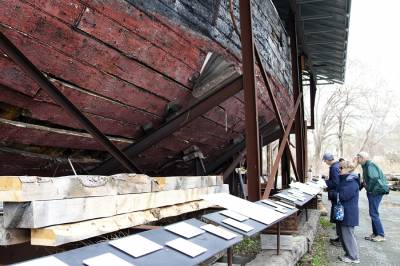 We also made a return visit to Woodman’s of Essex, renowned for its seafood, where we ordered the fried clams accompanied by French fries. But we did more than consume fat in this tiny town that was once a major shipbuilding center—and built many of Gloucester’s fishing schooners. We spent several hours visiting the Essex Shipbuilding Museum where our very knowledgeable guide, Jason had fished with his dad as a boy. He comes from a long line of Gloucester fishermen descended from Sicilian immigrants.

Not all of our friends and relatives were dead! We enjoyed lunch on the harbor at the Fish Shack in Rockport with Janet’s other 2nd cousin, once-removed named Richard, and his wife Cindy. Janet and Richard shared family history research results on-line and on a previous visit here. Our old RVing buddies Dick and Marion reside in southern New Hampshire, so we took the opportunity to visit them in Dick’s hometown of Winchester. It was fun to catch up, enjoy Marion’s home cooking and hang with deeply-rooted, native New Englanders. 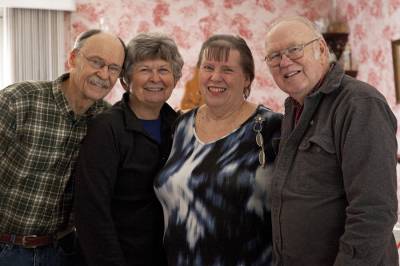 Visiting the Whippies in NH. Janet, Cindy and Richard in Rockport

In another memorable experience, we symbolically broke bread with Samuel Swett, Stu’s long-dead 9th great uncle. Samuel built a house in Newbury circa 1670 that also served as a tavern, and was the first property acquired by the Society for the Preservation of New England Antiquities, now Historic New England. In a twice-yearly event here we partook of roast chicken, vegetables, bread and beer, for an 18th century, tavern-style dinner accompanied by live music and stories from the era gleaned from early court records. 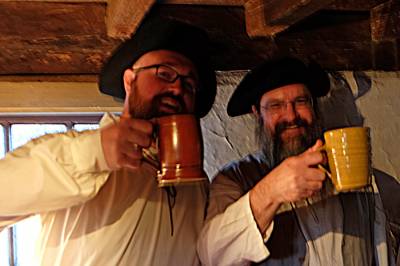 Stu at Swett-Ilsley House and "re-enactors" at tavern dinner

It was Samuel’s brother, Benjamin who perished along with 59 others near Massacre Pond in Scarborough, Maine during King Phillip’s War in 1677—Benjamin was Stu’s 8th great grandfather. We made a day-trip to Scarborough, a little south of Portland a few days after our colonial dinner. Somehow being in Samuel’s historic house and at the battlefield where Benjamin met his ultimate fate seems to make these men’s lives more palpable. Come to think of it, the same could be said of this whole trip and the ancestors who lived and died in the places we visited, not to mention enjoying our connections with the living.

This is once again another great story of your travels. Glad you were able to see the Whippies.

Cancel Reply
This is once again another great story of your travels. Glad you were able to see the Whippies.
Cancel Update Comment

What a great trip! I'm going to have to retire one day so I can travel, too.

Cancel Reply
What a great trip! I'm going to have to retire one day so I can travel, too.
Cancel Update Comment
Designed by Formative Studios
Copyright © 2020 Wilsons' Travels