Postcard #2 Edges of Britain--Dublin, Anglesey and Isle of Man In Dublin, Aegean Odyssey tied up near the mouth of the River Liffey, almost in the center of the city. A walk of less then two blocks brought us to the Red Line Trolley and easy access to much of central Dublin. This exemplifies one of the advantages of smaller ships: they can often dock or anchor in more convenient locations than larger vessels.

The Aegean Odyssey seems about right in other respects. With around 300 passengers we have the chance to meet, or at least recognize many, if not most of them. At 461 feet in length, with a draft of 20.5 feet, Aegean Odyssey is both more maneuverable and more accessible than larger ships. Of the seven accessible decks, only four have passenger accommodations. The ship's atmosphere is relaxed, not stuffy and both the dining room and buffet restaurant offer a good selection of well-prepared dishes. Oh, and wine is included. No space is wasted with a casino. 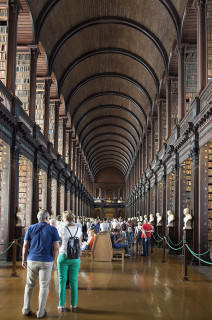 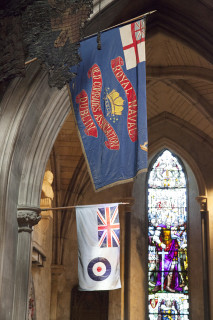 We remember Dublin as an energetic and youthful city from our previous visit fourteen years ago, and that has not changed. Another thing that hasn't changed–The Book of Kells remains a huge draw. Standing in line to view it is pretty much unavoidable–but worth it. Nick, our Road Scholar group leader, gave an on-board talk titled, "How Irish Monks Helped Preserve Classical Civilization in the Dark Ages." It provided us wonderful context to appreciate this remarkable artifact. The Book is a lavishly illustrated manuscript of the gospels, believed to have been produced in the 9th century at the monastery of Iona, founded in Scotland by Irish monks in the 6th century. Almost as much as the Book of Kells, we love the Trinity College Library where it is housed.


But much about Dublin has changed, most especially its skyline. The industrial and warehouse district near the waterfront has been or is being transformed into modern mid-rise and high -rise mixed use developments, with many residences. It's evident that Dublin has fully recovered from the Great Recession. At 1.2 million people and growing, Dublin has one-quarter if Ireland's population. 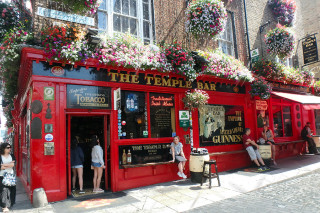 Dublin: Line to view Book of Kells at Trinity College; popular Temple Bar district​
With two days in Dublin, we spent one day on a city tour with our Road Scholar group, and one day exploring on our own. We visited the free National Museum with exhibits on fashion and furnishing over the centuries plus military history. We enjoyed an al fresco lunch in Temple Bar, a lively entertainment district and took a Jameson Distillery tour and tasting in the afternoon followed by a bit of shopping.
A short overnight sail across the Irish Sea brought us to Holyhead next morning but adverse winds and waves delayed our entering port until around 10:30 AM. We took a coastal coach tour around Anglesey, a large island off the northwest corner of Wales. On a showery day there was not that much to see, though we enjoyed a dramatically situated lighthouse and the informative talk by our local guide, Lynne. Maybe the best experience of this port was the Welsh men's choir who performed aboard ship in the evening. 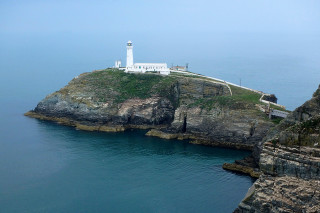 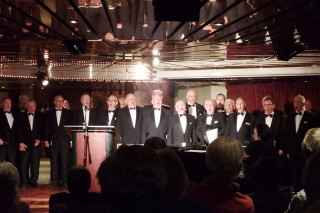 Then we were off to Douglas, capital, largest city and main port of the Isle of Man. This place was another of the reasons we booked this trip–and we just happened to be here on our wedding anniversary.

Like Guernsey, the Isle of Man is a self-governing Crown Dependency. And the Manx are proud of the Tynwald, said to be the oldest continuously functioning parliament in the world, dating from 979. Our coach tour stopped in St. John, site of Tynwald Hill where the Manx government gathers annually on July 5 to announce the new laws passed during the most recent parliamentary session. Since the laws are traditionally read aloud, it seems there is an incentive to keep the volume of legislation down.

We continued on to Peel, on the west coast of the 221 square-mile island, as our local guide, Fiona pointed out the rare Manx Loaghtan sheep with brown wool and four to six curving horns. In Peel we viewed the tiny harbor with more pleasure craft than fishing boats and walked around the castle guarding the harbor entrance for views of the town. We followed with a quick drive-through tour of Port Erwin, followed by a stop in Castletown. Here we walked around, bought ice cream and shopped in a charming town of stone, but with meager signs of economic activity. 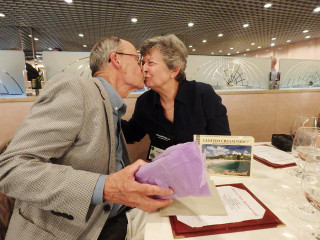 Back in Douglas, we attempted to work out a 6 mile train journey to Laxey on the Manx Electric Railway for a chance to view the Laxey Wheel. Alas, the train schedule and ours were not synchronized, so rather than chance being late for our departure, we opted to wander the streets of Douglas and tour the excellent Manx Museum with both Manx history and art on display. We watched from the observation deck as we were piloted out of Douglas harbor, then adjourned to the dining room where we and some fellow Road Scholars were feted for special occasions–a fitting finale to one of our more memorable anniversaries.