Entering here on a recent tour, our curiosity completely swamped any lingering misgivings. Living a mere 40 miles away for decades, we’d driven-by a number of times. More than once, we even stopped to check-out the “castle,” but it remained inaccessible behind fences and locked gates. Now we had the chance to see it and learn of its history under the tutelage of Bill Thiry, a director of Preston Castle Foundation and the facility manager.

Owned by the state until very recently, the castle had long seemed abandoned and derelict. Driving-by on one occasion we noticed that the roof appeared partially collapsed, and we figured the grand old building might be “a goner.”  Now, the new roof, structural stabilization, and clearing of debris means the building’s future may be much longer than we thought.

Today the castle serves as a venue for tours and events ranging from weddings to Halloween costume balls–pretty much anything the foundation can think of to try and raise some of the $17 million needed to restore the castle. It’s also a popular spot for filming, especially when the subject is the paranormal.

As we entered, any notion of a grand Victorian-style interior quickly vanished. Bill explained how the castle barely escaped demolition 65 years ago when the school closed. Only the protests of local citizens prevented the state from razing the building, but not before the interior had been stripped. Fixtures, decorative millwork, and most other details characteristic of its era are gone.

The school embodied the progressive ideas in juvenile justice current at the time it opened. Before then, delinquent boys–some as young as 8 years-old–could be incarcerated in Folsom or San Quentin Prison. At the Preston School they received an education, military discipline, and vocational training. The boys grew food, made clothes and shoes, operated and repaired machinery, and learned other practical skills and as a result made the school nearly self-supporting. 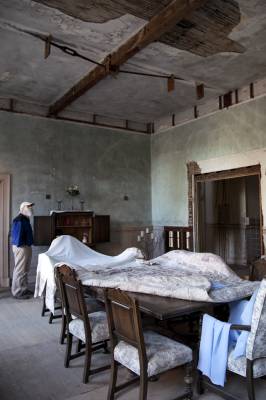 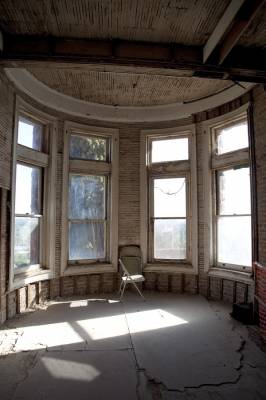 Dormitory, infirmary, classrooms, offices, library, staff quarters, dining hall, kitchen; all once occupied portions of the 50,000 square foot, four-story “fixer-upper.” Bill showed us how, more recently, the castle portrayed a vintage mental institution in an episode of  “The Great Escape,” a reality TV competition show in 2012.  Contestants needed to escape confinement in the former infirmary, and retrieve clues and tools in the dormitory before repelling down a bed-sheet rope en route to the $100,000 prize. 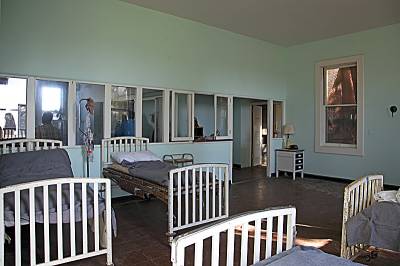 Some claim the castle is haunted by the ghosts of former inmates or by the ghost of Anna Corbin, a former housekeeper. Bill personally makes no such claims though he did mention that the foundation offers flashlight tours, and during October, Halloween Haunts. He also mentioned that a film called “A Haunting at Preston Castle” was filmed here. And, it turns out Anna Corbin was murdered in the basement in 1950, probably by one of the inmates, though no one was ever convicted.

Credible accounts of abuse and violence are documented, but many of the boys who spent time in Preston achieved success as adults. Tennis star, Pancho Gonzales; actor Lee J. Cobb; country singer Merle Haggard; and Eddie Anderson, who played Rochester on the Jack Benny Show, are all Preston alumni. Though Merle Haggard, for one, would prefer to forget his experiences here, a visit today is undoubtedly benign, educational and entertaining. Some might even call it haunting.

For tour information and registration contact Preston Castle Foundation: www.prestoncastle.com/tours.html ; or e-mail This email address is being protected from spambots. You need JavaScript enabled to view it. ; phone 209-256-2623.

OMG, Janet, quite a fascinating story and place. You've got my curiosity up enough to want to take a tour very soon. Can't tell you how many times I've been thru Ione but didn't know anything about this. Thanks for the eye opener.

Cancel Reply
OMG, Janet, quite a fascinating story and place. You've got my curiosity up enough to want to take a tour very soon. Can't tell you how many times I've been thru Ione but didn't know anything about this. Thanks for the eye opener.
Cancel Update Comment

This sounds like a great place to see. Don't you guys stay
Home?

How fascinating. So many interesting things so close to home.