That morning we met up with friends Bob and Carol, whom we met on a previous trip. Starting at Union Station, they escorted us on a guided walking tour including CN Tower, the financial district, and city hall, ending at the Art Gallery of Ontario. Here we were treated to a delicious lunch and free admission thanks to their AGO membership. Before we left home Bob and Carol made suggestions for things to see and do, and obtained transit passes that were waiting at our hotel when we arrived.
So, the three of us felt warmly welcomed, even connected, in this vibrant city though it was our first visit. We decided to visit Toronto (pronounced Torono, we learned) because well, we’d never been there. It’s a major North American metropolis, and Canada’s largest city, after all. Gail and Janet’s great grandfather was born here so we also looked forward to finding descendants of his siblings, and looking into family history, as well as catching-up with friends. 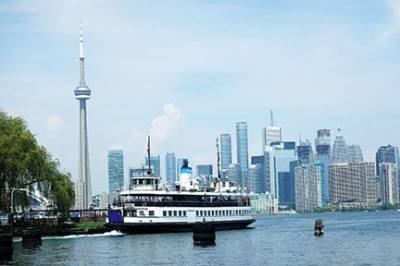 According to our Fodor’s guidebook, half of Toronto’s residents are foreign born, and nearly as many are native speakers of a foreign (i.e., not English or French) language. Although our connections here sprouted from deep, multi-generational roots in the city, the diversity of ethnic restaurants plus the faces we saw and voices we heard on Toronto’s sidewalks, streetcars and subway tended to confirm the statistics. Ethnic and cultural diversity aside, Toronto is definitely a Canadian city–it’s tidier, more polite, we’d say friendlier, than large U.S. cities we know.
After lunch at the AGO we perused a temporary exhibit on “Outsider Photography,” including thought provoking work by Gordon Parks and sometimes disturbing images by Diane Arbus and others. Then we decompressed by soaking up the landscape paintings of renowned Canadian artists known as the “Group of Seven.” 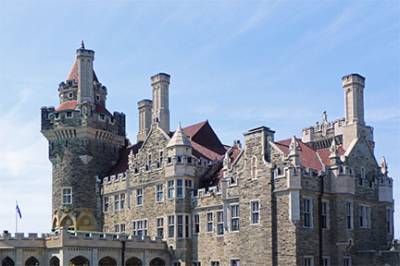 Our Toronto museum visits included the Royal Ontario Museum where we mostly ogled classical and Egyptian artifacts, and the quirky Bata Shoe Museum. Looking like an oversized shoe box, this museum houses an eclectic collection of footwear through the ages ranging from the 5,000-year-old (reconstructed) footwear of the iceman found in the Italian Alps, to Elton John’s platforms.
Casa Loma, Canadian industrialist and financier Henry Pellatt’s 98-room, mansion, built between 1911 and 1913 proved especially resonant. This fabulous house museum includes some exquisite ornamental plaster-work. We wondered if Janet and Gail’s Toronto ancestors, who were in the ornamental plastering business at that time, may have worked on this home.

Stu and Gail on our island bike ride.  A surprise face at the Aquarium.

The weather during our visit was surprisingly warm, uncomfortably muggy some afternoons. So we aimed for an early ferry trip to the Toronto Islands. Here we spent the morning exploring Center, Ward’s and Algonquin Islands on rented bicycles, enjoying the fresh air and exercise with delightful views of Toronto’s skyline. We finished-up at the 1808 Gibraltar Point Lighthouse before grabbing frozen yogurt and sailing back to the mainland. Seeking air-conditioned space, we opted for Ripley’s Aquarium of Canada near the CN Tower and found impressive displays, but an oppressively crowded space on a Sunday afternoon.
A day-trip in a small a motor coach led us to Niagara Falls, with a stop for lunch at Niagara-by-the-Lake and some wine-tasting. Though highly commercial, and over-developed, the Falls impressed us. The view from the top of Horseshoe Falls was mesmerizing and getting drenched aboard the boat beneath the falls seemed a fulfilling ritual. 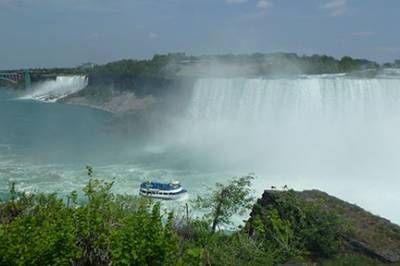 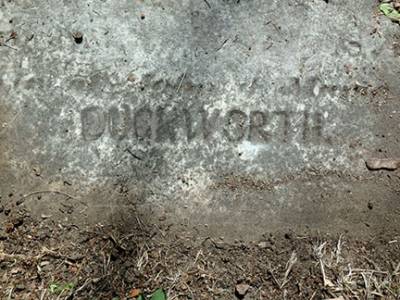 Squeezed between other activities, we found time to dig up Toronto family history. On Phoebe Street, the north side was lined with vintage row houses representative of former family residences, and a room in a semi-detached home on Grace Street was once occupied by Janet and Gail’s great grandfather who attended school nearby. Finally, on our way out of town toward Ottawa, we stopped by St. James Cemetery to pay our respects to Janet and Gail’s 2nd great grandparents and other relatives.
An overnight trip to Ottawa in a rental car involved a 4-5 hr drive each way, but proved worth the effort for the chance to see Canada’s Parliament in action, where the House of Commons was debating proposed changes to the National Anthem. Here, we also enjoyed the Canadian History Museum and the walk across the Alexandra Bridge with its pedestrian/bicycle lane. 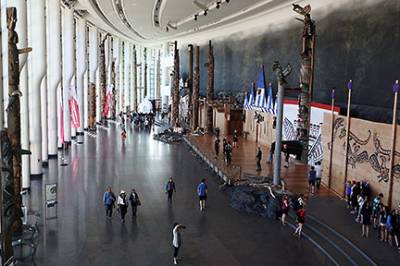 Though not really surprising, we think it worth mentioning how well we ate in Toronto. Terroni, a local chain of three venues featuring regional Italian cuisine, and at Beerbistro, where the flatbread and spicy beef tacos–as well as the craft beer–were memorable. But our favorite restaurant had to be Batch, literally across the street from our hotel (Cambridge Suites on Richmond Street East). Also a craft brewery, this place impressed us twice with the freshness and originality of their dishes–from the Mac & Cheese, to the flatbread and salads to the deserts. Couldn’t be beat.
Unless of course you count the meals we shared with friends and family–the pizza, beer and fried calamari with Megan and Michael; the delicious lunch, accompanied by some memorable wine, we were treated to by Bob and Carol at AGO; and the lovely salmon dinner Carol prepared for us at their home, also accompanied by wonderful wine and enjoyable company. We were even offered the use of Bob and Carol’s laundry facilities while we lingered over dinner–that was a treat no restaurant in our experience has ever offered.
So, it was with a tinge of regret as well as anticipation that we departed Toronto at 10:00 PM on a Thursday evening, heading into the night aboard a train called, fittingly, the Canadian.

Happy Travels , Janet and Stu (note we are in the CN Tower!)