Our driver stopped and pointed.  All eyes turned in that direction and we soon spotted a Brown Bear (aka Grizzly) munching berries, moving down hill toward us. Camera shutters clicked continuously.  With the bear just a few feet away, Stu’s telephoto lens was nearly useless.  The bear remained totally unconcerned with our presence as he ambled across the road behind our National Park Service shuttle bus and headed into the brush. Wow!

A comfortable and scenic ride aboard the Alaska Railroad’s “Gold Star” service from Anchorage to Denali Station had brought us here the previous day.  Our rustic and cozy cabin at Crow’s Nest was a friendly, welcoming accommodation.

Our 6:30 A.M. shuttle took us 66 miles into the six million-acre park.  At Eielson Visitor Center, we ate our box lunches and enjoyed a closer, if partly obscured view of the 20,320 foot-tall Mountain.  In addition to our close encounter with the Brown Bear, we observed a coyote trotting down the road, more Brown Bears walking across the tundra, a group of Dall Sheep on a nearby ridge, and a small herd of Caribou grazing near the roadside and more. 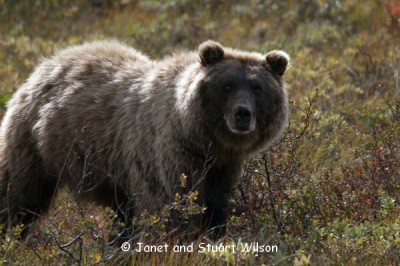 One evening we joined Karen and Ish for dinner at the McKinley Chalet Lodge, and toasted the 128th anniversary of Grandpa Cy’s birth and his adventurous life in Alaska.

A coach transported us to our next stop, the small town of Talkeetna.  Here we found a vibe almost the opposite of Denali: funky, with many small buildings of varying ages and styles; a non-aggressive panhandler or two; friendly locals; and a casual main street with shops and restaurants. It’s the launching pad for most attempts to climb Denali and is said to have been the model for TV’s “Northern Exposure.”

Rich was one of those friendly locals.  He had helped Karen make the Susitna Station arrangements. He called on us at the cabin we five were sharing at Susitna River Lodging.  We all went out to dinner at Rich’s favorite place–West Rib Pub & Grill–attached to the back of Nagley’s Market. He told us that Nagley’s Market started out down in Susitna Station, though that was several years after Grandpa Cy had left.

The Talkeetna Roadhouse featured perhaps our most memorable breakfast of the trip, the black and blue special: a sourdough pancake overhanging the edges of our ample plates and stuffed with blackberries and blueberries.  We treated ourselves to locally-made birch syrup and Stu had reindeer sausage to complete the experience–sublime.

Embarking on one of Mahay’s Jet Boats, we soon left the Talkeetna River, heading into the Susitna while our skipper, Steve offered an information-packed narrative.  We learned that “na” means river in the local Athabaskan language, thus, Talkeetna, Susitna, and Chulitna are the Athabaskan names for the three rivers that converge here.  Susitna translates as river of many sandbars, while Talkeetna means river of plenty.  The third, the Chulitna is the river of broad-leafed trees. The local Athabaskan tribe are the Denaina or river people. We also learned about rivers through the seasons, including freezing and Spring breakup, salmon migration and the life of Alaskan fur trappers.

Our next excursion–a Talkeetna Air Taxi flightseeing tour of McKinley–almost didn’t happen. The weather, nearly flawless so far on this trip, turned showery with a low ceiling. Flights were canceled in the morning but by our 6:00 P.M. time slot things had cleared some, though we were advised we might only see some lower elevation glaciers, and we would not get to land on the mountain.

Talkeetna and view of Mt. McKinley at Denali NP

However, due largely to our pilot’s skill and determination not to disappoint us (or perhaps the honeymoon couple who flew with us), we got a thrilling ride. He climbed steadily, followed glaciers up-slope, finding openings in the clouds, skirting jagged peaks seemingly feet from the Otter’s wingtips.  At one point we reached over 12,000 feet–pretty high for an unpressurized plane and us with no oxygen.  We did feel momentarily queasy, but finally broke through to sunlight and a view of the north peak. No glacier landing, but a breathtaking trip all the same.

After a fitting finale for our family adventure, we split-up next morning.  Karen and Ish headed for Fairbanks, while Gail, Janet and Stu headed for Anchorage, Gail to catch a flight home, Janet and Stu, a plane to Kodiak Island.

Sometimes called the Emerald Isle (it rains a lot there), we wanted to visit Kodiak for more family history and to see bears, Kodiak Bears. We succeeded in the former, exploring the Baranov Museum, where we established that William Erskine had owned the trading post at the time Grandpa Cy arrived with his young family in 1918, and went into business with him.
We had one decent day with a rental car exploring the island’s few roads, eating out at Henry’s, and investigating the Russian Church and Museum.

Regrettably, the weather finally caught up with us and our float plane was grounded–no chance to see more bears. So, after getting stuck an extra night in Kodiak (because of weather), we headed home via Anchorage and Seattle.  This much-delayed journey included time in Anchorage to head into town and a five+ hour layover at Seattle’s terminal in the middle of the night, but we made it home safely, if very tired, and with great memories and thousands of photos!