Standing in our Sitka hotel lobby at 11:00 A. M. without a room or transportation, we quickly jumped on the motel’s computer and scored three seats on a 6:30 P.M. flight to Juneau.  Our relief, however was leavened with a touch of resentment when we calculated that the 20-minute flight would cost us $176 each, or nearly $9.00/minute!  Compared with our Misty Fjords flight in Ketchikan at a little over $ 2.00/minute, it was sure no bargain, but then beggars can’t be choosers. We were glad to keep our reservations in Juneau and our trip on schedule.

At 30,000 or so people, Juneau is by far the largest city in Southeast Alaska.  It’s the capital and home to University of Alaska’s Southeast campus.  We toured the state capitol, the state museum, and met-up with Janet’s childhood chum, Alice Mauldin Tersteeg (a retired university art professor).  Alice showed us around and took us out to Mendenhall Glacier–very impressive, notwithstanding that it is receding rapidly.  After Alice, the highlights of our Juneau visit were our accommodations at the Silverbow Inn and a dinner at next door Zephyr Restaurant.  The rooms at the Inn were modern, clean and stylish though the place had sort of a sophisticated counter culture vibe, with great breakfasts including fresh baked goods from their own bakery and wine-tasting in the evening.  Zephyr was a revelation with homemade pasta (we all enjoyed one form or another), a surprising wine list, delectable  flavors, and memorable service.

We got help from a woman at the Observatory Bookstore who hooked us up with the historical librarian at the State Library.  Anastasia said the Library would be interested in digitizing Grandpa Cy’s photo collection from his days in Alaska circa 1910 to 1920.

To get to our next destination, Skagway, we returned to our preferred mode of transportation–the ferry.  Our journey up the Lynn Canal took us near whales, rocky islands (two with historic lighthouses) and beneath rugged mountains and waterfalls.  We awoke early next morning in Skagway to catch the White Pass & Yukon Route train up to the summit and return. An astonishing feat of engineering in 1898-99, carved this narrow-gauge railroad out of the side of the mountain with grades up to 3.0%, a cantilever bridge (since abandoned) and two tunnels.  Thirty-five thousand workers accomplished this feat, with 35 lives lost.  And Grandpa Cyril Percy Wood and Great Grandpa William Augustus Wood had to climb the pass on foot because the train wasn’t running in January 1899.

The White Pass trail is no longer hikeable (there’s a modern highway), but the nearby and perhaps more famous Chilkoot is a popular, if challenging hike. We hired Tom Strand of Trail of ‘98 Tours to drive us from Skagway to Dyea (a now abandoned townsite) and the Chilkoot.  Tom was personable, knowledgeable, low key. 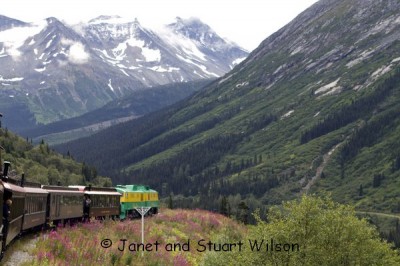 We walked less than a mile up the Chilkoot and signed the roster that the Park Service keeps there. We then found the last remnants of Dyea, searched for bears, and wound up back in Skagway at the historic cemetery where Tom showed us the graves of notorious gangster “Soapy” Smith and the man who shot and killed him, a Mr. Reed.  Reed has an impressive marble monument and Smith a barely marked grave, but guess which man history remembers?  We ended our tour with a short steep hike to a remarkably beautiful waterfall behind the cemetery–tranquil and exhilarating!

Skagway is a museum, its well-preserved business district protected by the Park Service, its setting dramatic, but it lacks the feel of a living town. The Arctic Brotherhood was our favorite building.  Grandpa Cy was a member in the Iditarod branch.  Klondike Gold Rush National Park Historian Karl Gurke met with us and provided new info on the location and travels of grandpa and great grandpa in Alaska and Canada in late 19th and early 20th centuries.

To get to our next destination where we were scheduled to meet-up with Janet’s and Gail’s cousin Karen and her husband Ish, we needed to return to Juneau on the ferry to catch a  flight to Anchorage.  A long travel day involved another scenic boat ride, then a long lay-over at Juneau airport, interrupted by a taxi visit to nearby Alaskan Brewing Co., where we were disappointed to learn no actual tour was on offer.  Still, an interesting talk and some beer tasting soothed our spirits and broke up the journey.

Our Anchorage hotel offered a great location–we could walk with our luggage to the train station–and a spacious suite for the three of us, it also provided shall we say, inadequate mattresses and late night and early morning train whistles!

We met up with Karen and Ish next morning for a great, and huge, breakfast at Snow City Café, before touring the impressive Anchorage Museum–much enlarged and enhanced since we last visited nearly 20 years ago.  We came here especially to see the paintings of Sydney Laurence, a renown Alaskan landscape artist who had boarded with Grandpa Cy and family in Iditarod for several years between 1911 and 1917.  The paintings are spectacular, including one canvas of Mt. McKinley at least 12' X 20'!  We also enjoyed the historical exhibits upstairs with photos and artifacts reminiscent of Wood family heirlooms.

Preparing for the days ahead, we spent time in a laundromat, shopped for muck boots and mosquito net hats in a sporting goods store, and capped the day with a memorable meal at Orzo, a fine and accommodating restaurant behind a non-descript facade.  We’re anticipating our big adventure tomorrow.      Happy Travels, Janet and Stu